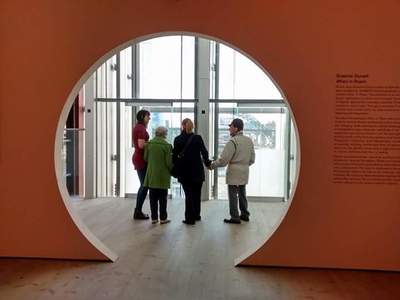 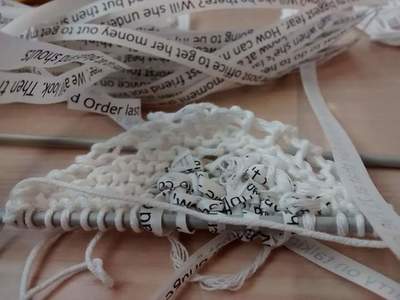 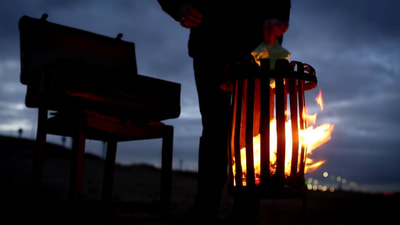 Dementia & Imagination Research Project
This AHRC funded research project brought together a team and partners with an unusually wide range of experience and expertise. From gerontology to health economics, art to clinical psychology, from universities, the NHS, local government, voluntary sector, arts organisations and care homes to work together to understand the impact of collaborations between people with dementia, creative people and contemporary art. I was commissioned as the North East based Research Artist to observe and engage in the research process and make work in response. I produced a body of work which questioned three significant areas:

1. What is dementia?
2. What can a research artist do?
3. What makes us dementia friendly?

1. LOSING THE THREAD | Unpicking Dementia - Facecloths, Performances and Film
I started knitting facecloths using cotton yarn and dissolving paper to find a way to express of my initial understanding of dementia creatively. Five cloths were created, the handmade thread of dissolving paper printed with a personal story of a personal dementia story. Often knitted in public places, they provoked many conversations with strangers as I travelled to and from the North East. When complete, some were used in public performances, washing my hands and face as I repeating phrases from the story embedded in the cloth. As the facecloth absorbs the water the paper stitches would dissolve, the story disperses and gaps and holes appear. Two of the resulting cloths were given to artists who have a specific interest in dementia to 'repair' in a way they felt appropriate to their practice. All five cloths are displayed together when exhibited.

A film of the performance When I think of you I think of Sundays can be seen HERE.

2. HIDDEN MEANINGS | Processing Research - Film with installation of beach stones
Intertwining two streams of thought; the voices in the film present a one minute observation of a gentleman with dementia in one of the very early research sessions. This is interjected with reflections from the whole project, both questioning the challenges of presenting what happens in closed sessions, how can we hear the voice of the participant? The location for the film is significant, the beach is closest to the first research location, the care home where my first thoughts and words began to form and are still the clearest. The burning papers are prints of transcribed interviews, words spoken by people who lived in that area, their words returned to their home and a place that they were familiar with. Paper records destroyed as agreed when access to the participant voice was finally granted. The film is presented with an installation of 660 beach stones with words of one participant interview, participant words, jumbled and unclear, unable to be deciphered.

The film can be seen HERE

​3. YOU MUST EAT | Talking Outcomes - Silver spoons cut with text, wooden cutlery boxes - Interactive performance/discussion
Throughout this project it became really clear to me that it’s not just what we say, but how we say it that makes a difference. My greatest fears are presented in the form of words cut into spoons, everyday items that have more significance at the beginning and end of life as we help another to eat. The urgency of the desire to sustain a healthy life plays out in the words we use for the process of feeding another person, and good communication becomes more vital. By cutting directly into the bowl of the spoon it becomes damaged, it’s function challenged and a new way of working might be required to make it useful once more.